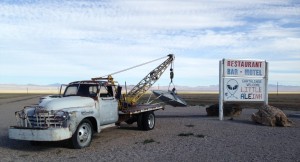 The next morning I had a decision to make.  Should I go back and look for my lost camera?  To do this would be hard because it was 120 miles from the gas station in Ash Springs to the spot where I lost the camera and a further 50 miles from there to the gas station back in Tonopah.  This meant that riding back and forth to look for the camera wasn’t an option.  I’d get one pass along the 20 mile stretch of highway from the 375 sign to where I know I last had my camera before having to drive 30 miles for gas and then go back to look again.  The camera had the first two days-worth of photos on it, and I didn’t want to lose the memories.  It also had my planning photos, with all my gear laid out.  I’d have to do that all over again if I wasn’t able to find the missing bit of kit.  So, that was it then – back into the desert I would go.

I set off to Ash Springs, where I bought two 1 gallon fuel cans.  Each can would give me an additional 40 miles or so to travel, and I reckoned that with the extra fuel I would be able to do a single pass up and then back again from the junction of 375 and then head off towards Utah.

I headed back along 375, which again I had to myself.  When I reached 80 miles I emptied the fuel cans into the bike. 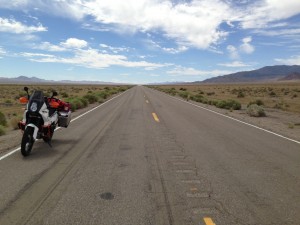 There was still a little left, so I hung onto that for later.  At the junction of 375 I stood up on the pegs and rode back the way I had come at 15 miles an hour, dilligently searching the road and the sides of the road for my small black camera case.  It’s hard work riding that slowly in the desert – there’s no longer a breeze to cool you down.  I figured it would take me a little over an hour each way, if I didn’t find the camera sooner.  The sad thing is that the camera case looked exacty like every chunk of tire that was ever deposited by the side of the road, so on many occasions I’d get excited that I’d found the camera and leap off the bike, only to find another chunk of rubber.  I made my way to the last place where I remember taking a picture, where I got off and wandered around for a while searching the ground.  Then I got back up on the pegs and made my way back along the side of the highway, waving cars by as they approached from behind at four times my speed.  After a long search the camera wasn’t found.  It’s a shame.  I don’t care about the camera but I can’t re-create the photos I had taken thus far.

It made me realize how important it was for me to take pictures, so I decided to buy another before heading to the wonders of Southern Utah.   I followed the advice of the chap at breakfast who had told me there was a WalMart in a town in Utah called St George where I could pick up a new one.  I had looked at the map over breakfast and reckoned I could get there by nightfall.

The 6 to Ely goes through some quite impressive landscape, but other than that its nothing remarkable. My fuel light came on as I rolled up to the traffic light opposite the Shell station, which was rather handy.  I filled up the bike then stuffed my face at the local Mexican restaurant.  It was about 6pm and I had another couple of hours of light left. I was faced with the choice of camping locally or heading to St George, some 330 miles south-east through the desert.  I tooled up to the local state park, where the campsites were all first-come, first served.  Given the late hour all the sites were taken.  And I wasted 40 miles of gas looking.  I went back to Ely, filled up and bit the bullet – St George here I come.

45 minutes or so outside of Ely I started to get really tired.  It wasnt’ surprising given the slow, hot riding in the desert earlier that day.  I started seeking out places to stop by the side of the road, but it was all flat grazing land.  If I stopped somewhere I’d stick out like an orange and white sore thumb.  Just as the light was starting to fade I saw a pull-off that appeared to go up a small hill into a clump of scrub.  I whipped the bike around and drove off the road, a little interpid about my lack of off-road ability and fearing falling off the bike and being trapped like a turtle with no-one for miles around.  I needent have worried – I made it up the hill just fine. 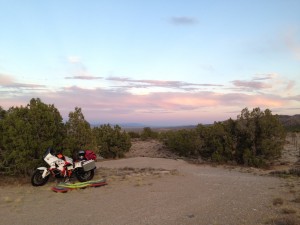 The road looped around and the bushes provided the perfect protection from the road.  I popped the bike on it’s stand and scrambled down the hill to make sure that I couldn’t be seen.  Once that was confirmed I went back up, layed down my tarp, roll-mat and sleeping bag.  I grabbed my knife and headlamp and prepared for a night outside, under the desert stars.

That night only a handful of cars passed me by.  There wasn’t a cloud in the sky and I could see all the stars.  I even saw my first low-orbt satellite.  No alien spaceships though.

The following morning I was woken early by the howling of what I’m guessing was a pack of coyotes.  The sun was just starting to light the sky and I figured that was a good a time as any to get moving.  It didn’t take long to pack up and get back on the road, where I was immediately thankful for my heated grips, warming my hands against the cold morning desert air. 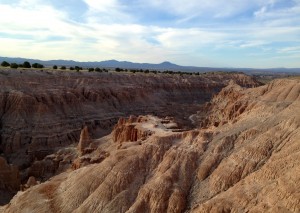 As I left the desert and headed over the hills into Utah I passed by a place called Cathedral Park.  This little roadside stop is a teaser to what you will see when you get into Utah if you follow the road.  I stopped here briefly, leaving my bike idling in the empty car park as I explored the deserted attraction.  Will this be what its like if there’s an apocolypse?  Those that are left being able to wander around our national treasures all by themselves?  I liked it.  Not that I’m wishing the apocolypse on anyone.  But it did encourage me to get up early more often.

On the hill down into the city of St George you pass the Snow Cliffs State Park.  I turned around to have a look but it was $6 to get in and I couldn’t be bothered to get off the bike to get my wallet out.  After all, I hadn’t even had breakfast yet.  I’m sure it’s a lovely place.

I finally arrived in St George and was grateful to spot a breakfast restaurant as soon as I rolled into town.  Five minutes later I was sitting at a table, drinking hot tea and anticipating the delicious omlette I’d ordered.    And they had wifi.  Perfect!  I decided to book a hotel in town for the night, get settled in and then go camera shopping.

The hotel were gracious enough to let me check in early.  The air-conditioned room was heavenly.  So was the shower, which doubled as a laundromat as I washed my clothes with the soap while I was in there.

A quick trip to best-buy and a call to my friend Jenn, who knows her cameras, had me in the posseson of s shiny new Canon point-and-shoot, a spare battery and the brightest, most conspicuous camera case I could find.

Although sleeping under the stars in the desert had been both beautiful and romantic, not knowing where I was going to sleep had been rather stressful.  I decided that I would take advantage of the air-coonditoned room and the wifi and spend some time planning the next couple of weeks of my journey.  I stayed an extra night, and used the time to book hotels and camp-sites that made traveling to the sites on my map easier.  That way I could concentrate on seeing the sites, rather than stressing about not having somewhere to sleep.  Originally I thought I could just wing it, but once on the road I realized that some certainty made it easier for me.

I also decided that I wanted to share more of my trip with my girlfriend Victoria, who was presently slaving away at her office back in California.  I called her up and asked if she could come out to meet me in Oregon to ride out to Crater lake.  As luck would have it she didn’t have any plans that weekend, so I booked her a flight and she found us a camp-site.  So now I’ll see her in a couple of weeks, rather than in the middle of September, which was the original plan.

On the second night, while I was having dinner at the counter of the local diner, the chap sat next to me struck up a conversation.  He was a trucker by trade, but both his liver and kidneys were shot and dialisys (sp) had hiim at home most of the time.  He’d leased his rig out to some other chap to drive, and that was his source of income.  He seemed quite sad not to be able to travel and encouraged me to stay on the road as long as possible.  The following morning my adventures would begin again.  Right after the free breakfast.