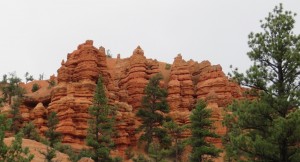 My destination this morning was Bryce Canyon, another NP on my list to visit.  It was a short journey from Panguitch.  To get there you have to pass though Red Canyon, which has amazing deep orange rock formations on either side.  If you happen to visit Bryce from a different direction then I highly recommend popping by here on your way out. 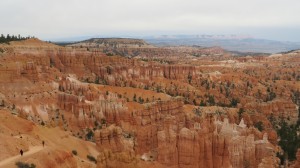 Once in Bryce Canyon you follow a nicely paved road along the rim of the canyon to various over-look points.  The first one is Sunrise Point.  If you follow the overlooks in consecutive order then this would be your first real-life glimpse of the canyon, and I have to tell you, it’s amazing!  The rock spires are many different shades of orange and yellow and they fill your view.  Its a lot to take in all at once.  Hopefully the pictures do it some justice.

As I pulled out from one of my stops I noticed in my mirror another adventure bike.  We both stopped at the last overlook in the park and I wandered over to introduce myself.  The couple on the bike, Brian and Jenny, were from High Wycombe, which is not too far from where I grew up.  They had their BMW 1200 GSA shipped from the UK to Ancorage, AK.  When I met them they were on week ten of their year-long trip.  They are planning to ride to Argentina, then have their bike shipped to South Africa and ride around there a bit.  You can check out their adventures at www.kelstan.com. 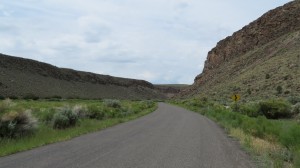 The ride along the 22 from Bryce Canyon is deserted and beautiful. It follows a river that has dug a gorge through the rock. Either side is swathed with fields filled with flowers and grasses. As I rode I spotted a young buck running gracefully across the field, not seeming to be in too much of a hurry, but going just fast enough to get away from me. 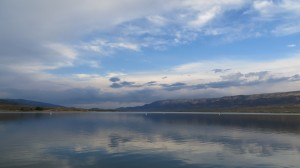 Everyone in Otter Creek drives ATVs.  I wasn’t sure what the tow parallel tracks by the side of the road where until I witnessed a steady stream of ATVs go back and forth while I was setting up my tent.  I suppose its cheaper than owning a car, if all you’re doing is going fishing for trout for your dinner.  I wonder why we can’t do that in cities.  If you’re only popping down the shop for a carton of milk, or going to see your mates, an ATV around town would be much more fuel efficient than a car, and easier to park.  It’d be like 4-wheeled scooters.  One step down from a Smart car.

The mind can play tricks on you, you know.  If you are reading a sentence and there are letters missing from a word you’re familiar with then the brain will put the letters back for you.  Under most circumstances this is useful.  Tonight I didn’t agree.  I’m certain when I was at REI a few weeks ago that the dried meal I had picked up said Bacon and Cheddar Mashed Potatoes.  Just as I am sure the girl who checked me into the camp site was sure that the cafe in the nearby village closed at 6pm, when I discovered at 5:25pm when I went for dinner that they had closed at 5pm.  I trundled back to the campsite to have my first camping meal of the trip to find that my delisious, meaty potatoes were a ruse.  I’d been tricked.  The packet read read “Baco Mashed…”  What the fuck is Baco?  That sounded to me like something that you would have cleaned your oven with in the 50s.  Oh, well.   Too late now.  Baco it  was.  So I sat at the campsite, hot choc and bacon imposter for dinner, updating my journal to the ominous ovetures of a thunderstorm rolling in, that I hoped I would escape.