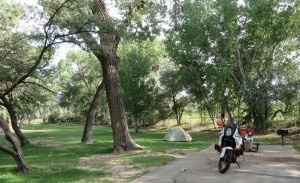 I haven’t mentioned it by name yet, but the Tamarick Restaurant sure is the place to eat in Green River. It’s there or Ray’s (who only serves burgers).  Last night I walked there for dinner so that I could have a glass of wine with my meal.  They have an “Outlaw” red that apparently the cowboys used to drink out of tin cups by the fire at night.  Well that sounded appropriate to me, so I had me a couple of glasses with my bison burger.  My hosts at the Tamarick (because gracious hosts they have been) seem to be ok with me hanging out and reading or writing as well as charging my devices, and for this I have been very grateful.  It meant that this morning I was able to locate a KTM dealer in Boise and book and oil-change and order a new front tire to replace the wobbly one that is driving me a little nuts (to be honest).

I picked a good spot to use as a base camp for my forays into Arches and Canyonlands.  GR is only about 40 miles ride to each one.  However, the road construction was a little frustrating this morning – about 10 miles of gravel at 40mph (which is the speed where my front tire wobbles the most).  Never mind, it was over fairly quickly and I was soon at Arches.  I was very happy with the National Parks annual pass that I  picked up at Bryce Canyon.  $80 for all the parks for a year – that’s a bargain and it made getting in a snap.

For some reason I decided to listen to my ipod (I was going to say “walkman” and then wondered how many people would know what one of those is?) as I rode around the park, much to the amusement, I am sure, of the people driving around me, watching me up on the pegs, bouncing around as I went along.  The first song that came on was “Stairway to Heaven” by Led Zepplin.  I thought that would be an ironic song to snuff it to on my bike, though fortunately it didn’t happen.

OK, I have to ask.  Why are you still reading this?  If you haven’t realized it already, you should be putting down your internets device, and booking a trip to Southern Utah to go exploring.  Seriously.  Certainly my descriptions aren’t going to do it the justice that it deserves.  In a moment I’m going to try and describe Arches National Park, but I’m wasting my time really.  It can’t be described.  It’s like vanilla ice cream or good sex, you have to be there to know what it’s really like.  Forget the Helen Keller cotton wool for cloulds malarky.  Take a week out of your life and travel out here.  You’ll thank yourself for it. 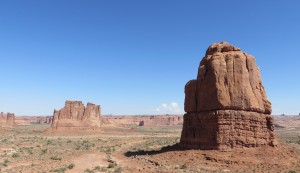 So, you drive from the canyon road that descends into Moab up a series of switch-backs to reach the floor of the park.  Each turn reveals a liitle more.  An outcropping here, a large red wall there.  It’s quite spectacular the way it’s set up.  The drive through the park took me about 3 1/2 hours all told.  Again, I’ve included a couple of photos that I hope give you the general idea.  The walk to Delicate Arch, which is the one you see in all the pictures, was a mile long hike iin the desert that I wasn’t prepared to partake in wearing my AStrars and touring trousers. You’ll have to make do with the 20x magnification shot from the car park (thanks Jenn for helping me pick the camera, you saved me quite the walk).

While getting my clobber back on I noticed another GS pull up (haven’t seen another 990 yet, by the way), so I wandered over and introduced myself.  Ricardo, the intrepid explorer, had ridden from Florida to Alasksa (what is it about GSs and Alaska, anyway?) and was on his way back down again.  His wife had told him to be home in 5 days, or she was changing the locks.  He was telling me he wanted to explore the mountain passes in Colorado.  I wonder what the outcome of that dilema will be?  Anyway, Ricardo is a photographer, and you can check out his talent at www.ricardoserpa.com.

After the park I dipped into Moab for a quick bite.  As I was getting back into my gear I got hit with a couple of big, juicy rain drops from the thunder clouds that had been building all day.  That was my que, and I was off back to GR.  As I got on I70 I could see the rain falling from the clouds to my left and the wind was blowing them my way.  Not a big deal, I thought.  Well, not until I saw the lightning striking the desert floor from the clouds.  At that point I became painfully aware that I was sitting a good couple of feet taller than all the traffic around me, and that if lightning was going to strike, I was the perfect target. Not wanted to get turned into a kebab on wheels I turned the speed up a notch ang got a shift on back to camp.

I arrived just in the nick of time.  I’d just removed my boots and grabbed my writing implement when it started raining cats and dogs.  So, my dear readers, you’re getting this from inside my tent, with the splattering of huge rain drops accompanying the clattering of my keyboard.  Tomorrow I’m off to Canyonlands, the last stop down here at the bottom half of Utah.  I am, however, thinking that it would be great to come back here one day in a convertible and do the hikes I’ve been avoiding.