When I was young I used to read the Lone Ranger comic books.  I don’t remember them very well, but I I do remember the scenery; towering walls of rock looming over the characters.  Today I went to Canyonlands National Park and I experienced those towering walls for myself.  The road in has a glorious pair of 20mph hairpins.  On the way in I took them gingerly, but on the way out I gave it some stick and it was a lot of fun.  To get the photo of the hairpin I had to stand on the edge of the cliff, as close to the precipice as I felt comfortable.  I wondered if I fell wether the tourist bus coming down the road would think I was a base jumper because of my motorcycle gear and camelback.  They would have been quite disappointed in the show when my ‘chute didn’t open. 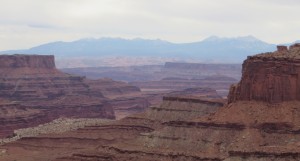 In contrast to yesterday at Arches, where it was really hot and sunny, the visit to Canyonlands was made under a grey sky.  I actually liked a little reprieve from the sun for a change.  Once in the park, you stop at the first viewpoint, and voila, there’s a stunning view of canyons, stretching for miles in front of you.  To get the best shot it is necessary to clamber around a really steep precipice.  Again, I hoped not to fall, in my clunky motorbike boots, and was successful in negotiating the traverse.  There are several overlooks in the 34 miles of park loop.  Rather than spoil them with a description, I’ve included a couple of photos for you.

The ride up the 15, over the mountains between Green River and Salt Lake City was really great.  It’s all long, 85mph sweepers of two-lane highway.  There aren’t any photos because I was having so much fun I didn’t care to stop and take any. Needless to say, my journey was fairly quick and it wasn’t long before I was at my destination; REI Salt Lake City.

I don’t know if REI SLC do a better job of stocking, or if REI SF just has a swarm of customers who decimate the shelves, but the SLC branch had a new duffel, sleeping bag and Pro Bars just sitting there, waiting for me to replenish my fire damaged equipment.  While in there one of the REI staff spotted my Tech 8s and asked me what I was riding.  It turns out he had a KTM 950 Adventure and bought all his stuff from KTM Twins.  He was really interested to hear that I get my 990 serviced downstairs from the web shop and wanted to know all about it.  The motorcycle world is a small world.

After swapping all my gear from the old duffel to the new one in the REI car park and disposing of the old duffel responsibly I headed to downtown to spend the night in a luxurious hotel bed.  There’s nothing much to report about my SLC experience, other than Lex, the doorman, was really helpful – finding a great spot for my bike next to the hotel owner’s car in the basement parking lot.  For some reason my parking fee was credited back to me, I think Lex did that too.

While in town I went to the cinema to watch Elysium.  I know, I know.  Ewan and Charlie would have visited a Mormon orphanage, or ridden around in a horse-drawn carriage or some shit.  Me, I chose the air-conditioned cinema and a matinee (which was $6, by the way – find me one for that in SF).  I found the film to be quite moving.  There was something about the class disparity and overcoming oppression that rang a bell with me.   Another thing that struck me was that their vehicle budget was higher than the last Fast Five flick.  They had themselves a real GT-R as well as a Bugatti and a space station.  I was dead impressed.