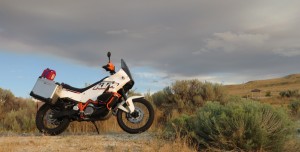 Antelope Island is just a hop, skip and a jump along the 15 from Salt Lake City, so the journey there was a breeze.  When I was checking in at the toll booth at the beginning of the 8 mile long causeway the lady told me that the gates were closed from 10pm to 6am, so I was going to be trapped on the island for the night.

Don’t let the smell on the causeway fool you.  The foul stench of whatever is rotting in the shallows disappears once you get onto the island.  As I was cruising around to the camp spot I passed a beach with a diner – well that was dinner sorted then.   When I rolled into the camp spot there was a couple sat at the picnic table, which was covered by a tin sun shade, their mini-van parked in the parking spot.  I hopped off to talk to them and they were just there admiring the view.  Steve was a Harley man himself, but he gave the KTM a once-over and exclaimed that it was “dynamite”.  I told them I was just going to pitch my tent and then pop down the cafe for dinner, so there was no need for them to shuffle on.  Steve told me that it’d be warm enough to just jump in my sleeping bag without the tent, so I took note and then took off for a burger.

Sadly the cafe closed early on Sunday, so no burger for me.  When I got back to the camp site Steve and his missus had left.  I pulled my new sleeping bag out, and grabbed my roll mat, pillow and the tarp (to put on the ground to stop the roll mat from getting a puncture).  I then set about making what promised to be a hearty Shepard’s Pie boil in the bag meal.  As I was eating the sun was going down, so I jogged off to the edge of the water to take some photos.

The lake is pretty much glass smooth, so there were some great reflections.  I hope that I captured them well in the photos I took.  The sunset was really smashing, and serene.  Once the sun had nearly gone down I headed back to the camp site and packed everything up except the sleeping gear so that I could make a quick getaway in the morning and piled the bike gear on the picnic table.  I took my clothes and shoes off and piled them neatly next to the sleeping bag, along with my headlamp and lay down for the night. 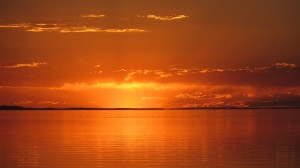 The island camp spot is about 10 miles from the nearest town, so there’s not really any ambient light pollution.  The night sky was absolutely clear, so I could see all the stars and the Milky Way.  As I lay looking up I saw a shooting star.  And then another.  Now I was on the look-out for them, and all in all I saw a total of nine before I went to sleep.  The best one had a big trail behind it as it went.  I don’t know if there was a meteor shower or something, but they were going in all different directions and from different points of origin, so maybe I was just lucky.  I’m not telling you what I wished for.  So there I was, naked, cozy in my sleeping bag under the stars when I drifted off to sleep.

I was woken up by violent a wind driving rain at me horizontally.  This wasn’t ideal.  I decided that my best bet was to put the sleeping bag up on the picnic table, under the shade and see if that helped.  I leapt out of the sleeping bag and as soon as my weight was off it, the roll mat started blowing away.  Here I was, stark bollock naked, running after the mat, while clutching my sleeping bag, pillow and tarp so that I didn’t loose them too.  I’m sure it was quite a sight.  Fortunately it was dark and everyone else appeared to be fast asleep in their tents.

I managed to grab the mat and tried to get everything on the table.  The tarp was getting caught in the wind. So was the mat.  It was like wrestling an angry alligator.  Meanwhile the wind was still blowing rain at me.  Eventually I got everything situated on the table when I remembered that my clothes were still on the floor.  Oh, crap!  Off I went again.  Now I was really awake.  I could see the sun was starting to come up, so I decided to stuff everything in the duffel bag, get dressed in my bike gear and go. (to be continued…)

This entry was posted in Motorbikes. Bookmark the permalink.