It’s great having a bike to ride around town.  There is one problem though.  Riding around town means not riding far enough to charge the battery.  I discovered that rather quickly when I turned the key and pressed the magic start button and nothing happened.  Fortunately my driveway slopes downhill and I was able to “bump-start” the KTM but I decided that I’d find a more elegant solution than having to do that every morning.

The quick, cheap and easy solution was to buy a Battery Tender Junior.  This handy little device has 4 stages of operation to make sure that your battery is charged properly and then stays charged.  The first stage is a safety check, checking that there is good DC continuity and checks the voltage.  The second stage is the bulk charge stage, which charges up the battery to about 75%.  The third stage is the absorption stage, which is the clever part that optimizes the battery for peak performance.  “Absorption charge ends when the battery charging current drops below the optimum recharge threshold or the absorption timer expires.”  Stage four is the maintenance stage, where the battery is charged at a very low amperage until it reaches maximum capacity and then kept at full charge without over-charging.

The charger comes with a handy fused pigtail that attaches to the battery and has a quick-connect to the charger.  Installing the pigtail was surprisingly easy.

The battery on the KTM is located underneath the fuel tank at the front of the bike. To give myself more room I lifted the fuel tank. Remove the seat and then undo the single bolt that holds the tank in place and then it can be lifted up and out of the way. 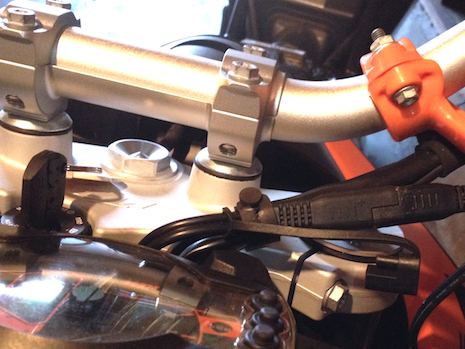 I tucked the wiring into the existing wiring harness and traced the clutch like up through the handlebars, with the connector right up by the instrument cluster, where it will be easy to get to.  A couple of strategically placed zip ties hold the pigtail in place to make sure that it doesn’t stray and get caught up in the steering yolk when I’m riding.

Now I can plug the Duke in when I get home and know that it’s fighting fit and ready to go when I leave for work in the morning.  Problem solved.

This entry was posted in Motorbikes and tagged Duke 690, KTM. Bookmark the permalink.