This was it!  The bike was all packed.  I was ready for the off.  Sam took a couple of photos of me riding down the street, which I though woud be a fitting first photo for my trip and then I was headed to my first stop, to visit my friends Jen and Jason in Sparks, NV.  I rolled onto 280 and as soon as I got to 101 to get across the Bay Bridge traffic came to a stand-still.  I felt that the bike was too wide to filter through what looked like narrow gaps in the traffic, so I inched along in the heat, frustrated by the congestion.  In a way though, it was good.  It reminded me why I was taking this tip in the first place – to explore the open road, to get away from the hustle and bustle of the city and to enoy the peace and quiet of the wilderness.  In the end it took me nearly an hour to leave the city – it was almost as if San Francisco didn’t want to see me go and was making a last-ditched effort to keep me there.

As I approached Sacramento I hit rush-hour on the freeway.  It was hot and slow.  I plucked up the courage to filter with my wide luggage, and found that is wasn’t that bad after-all.  Huh!  I’ll show you traffic.    After battling rush-hour for a while I stopped at In ‘n Out in Sacramento, thinking that this would be the last time that I would see the California-based chain for a while.  My animal-style burger was good!

The rest of the journey into Sparks was un-eventful.  I stopped at Donner Lake to take my first scenic pictures.  The ride down the mountain into Sparks was a thrillingly steep and fast descent.  When I rolled into town Jen and Jason were waiting patiently for me and whisked me off for dinner and a beer.  It was good to catch up and I was grateful to have a planned stop, a warm sofa and shower for the first night of my trip.

The next day I decided to take the bike to Reno KTM to have the front tire looked at, becasue it had been wobbling something terrible at about 40mph.  I called right at 9am to explain my problem and they were happy to squeeze me in as soon as I could get there.  I arrived and they rolled the bike in and set to work.  A short while later they returned to tell my that the tire was propperly beaded, the wheel was true and that they had tried to re-balance it, but that  it was still a bit wobbly. Their conclusion was that the tire was out-of-round.  I decided to stick with it and after a very reasonable bill I was out of there.

Back at Jen and Jason’s I didn’t really have a plan.  After-all, wasn’t that the point?  However, I wasn’t sure where I would be spending the night, so I took a look at my map of destinations and guessed that I could make it to the Extraterrestrial Highway by nightfall.  I took a quick look on the Internet and discovered that there was a hotel half-way along called the Little A Le Inn.  Perfect!  A quick phone call confirmed a bed for the night and I set off into the desert to look for UFOs.

The journey towards Area 51 taked you along highway 50, which is called The Lonliest Highway, and for good reason.  There isn’t much going on.  I’ve only got about a 180 mile range on the bike.  When I left Sparks I didn’t think fuel woudl be a problem – I figured that I could just check the GPS when fuel was getting low, find a gas-station nearby and fill up.  Welll, on the 50, it isn’t that easy.  When my fuel started running low I checked for a gas station and the closest one appeared to be in Austin, which was well beyond the range of my tank.  I was a little concerned that I’d be out of fuel at the side of the highway and I started to regret leaving the syphon tube at home in the garage.  As I was wondering what I would do I spotted a little cafe in the middle of nowhere, that had a magical GAS sign.  I pulled up and there was a big fuel tank sitting on the ground with a handle and one of those old analog rotating dials that clicks around for pennies, 10 pennies, dollars, etc.  I wandered into the cafe and the lady told me to pump my gas and then come back in to pay her the amount I read on the dial.  It was all very trusting and old-fashioned.  The walls of the cafe were covered in photos of fighter jets and I’m guessing it was the local hang-out for the pilots of the nearby top-gun school.  The gas was only 87.  I’m sure it didn’t do any harm.  The gas in Mexico has to be worse, and I know people who ride their 990 there.

A jaunt up the hill with my full gas-tanks found me in Austin.  I stopped and filled up again (just in case) and had a quick bite in the local cafe before heading down the valley to the last gas station before I headed into the desert.  The valley was desolate – this is the first part of my journey where I had the road to myself.  There wasn’t a car in either direction for as far as I could see.  It was quite refreshing!  On the other side of the valley I filled up at Tonopah and headed off into the deserted wilderness of Area 51. 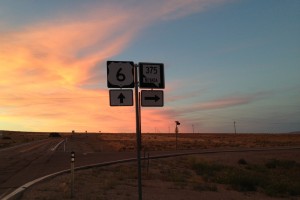 As I rode along the highway the sun was setting.  I stopped every few minutes to whip out my handy camera and take another snapshot of spectacular colours over the rocky outcrops.  Eventually I came to the junction of 375 – The Extraterrestrial Highway.  It was very exciting to come to the first pin on my map.  I stopped the bike to take a picture of the road sign, but to my horror, my camera wasn’t in the side pocket of my camelbak, from where I had been pulling it all day.  I must not have zipped the pocket back up correctly so it had fallen out.  Fortunately I was able to take a quick picture with my phone because it was getting dark and I was getting tired but I still had about another 80 miles to ride to get to the hotel.

Riding the 375 as the sun went down was amazing.  There is no ambient light in the desert.  I saw the headlights of a car coming towards me from the other direction.  It took about 15 minutes of me watching the lights before we passed each other.  That was the only other car I saw before I got to the Hotel. 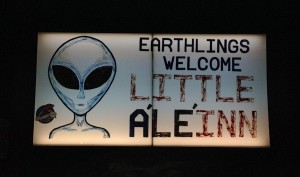 The Little A Le Inn is literally an oasis in the middle of the desert.  Nestled in the little town of Rachel, its the only thing out there.  The next closest place is Ash Springs, which is another 45 miles down the road (those of you doing the math are realising that I’m going to be running on fumes when I get there to fill up).  I knew that the kitchen closed and 9 and the bar at 10.  I had been racing to get there in time for a meal, but unfortunately I got there at about 9:05.  Fully prepared to chow down on a meal-bar for the ngiht I was really pleased and surprised that the chef said he’d make me what-ever I wanted before he closed the kitchen down.  I was very grateful for my turkey wrap and Coronas that night, I can tell you!

After my dinner I took my beer outside with me and joined the small crowd of locals and a couple of travelers on the porch.  What transpired felt to me like the script from the X-Files.  There was one chap that had stopped in Rachel for one night while on a road-trip on 2007 and he was still there.  He had been told to go there by a Shamen in New Mexico to repay a debt and he’s still working on it.  One fella had been abducted by aliens since he was about 12.  He said that he wasn’t supposed to remember the abductions, and that the “Greys” that were abducting him were very confused, so they called in the “Whites”.  He remembers asking the Whites why they were abucting him and they told him they were interested in his brain.  He doesn’t remember any more abductions after that, but he thinks that’s becasue the Whites figured out how to make him forget.  There were discussions about remote reading,  experimental aircraft doing 90 degree turns at near mach 1 speed over the desert, invisibility technology and I’m sure more that I have forgotten about.   Needless to say, I slept soundly that night, and my arse didn’t hurt in the morning, so as far as I know I wasn’t abducted myself!